Friday the 3rd day of June I headed up to Medco Pond to camp and fish. The next day, Saturday was free camping day at state parks in Oregon. So my plan Friday evening was to stop by Joseph H. Stewart State Park at Lost Creek Reservoir, and try to reserve a free spot for the next day. Apparently they weren’t taking reservations for the free camping day unless you were staying the night before. I asked what time to come back the next day and left for Medco Pond. Got to the old logging pond late in the evening and found a nice little spot not far from the pond to set up my tent and construct my pontoon boat. By the time I got my toon together it was dark, and the stars very bright. I wanted to have my boat put together the night before so I could be on the water really early. But I slept in. Being outdoors is a better environment to sleep I don’t know why lol. By the time I got on the water there were already some people fishing, from shore, and other small boats. Also an Osprey was fishing all morning, I could watch him from my tent hitting the water was very cool. 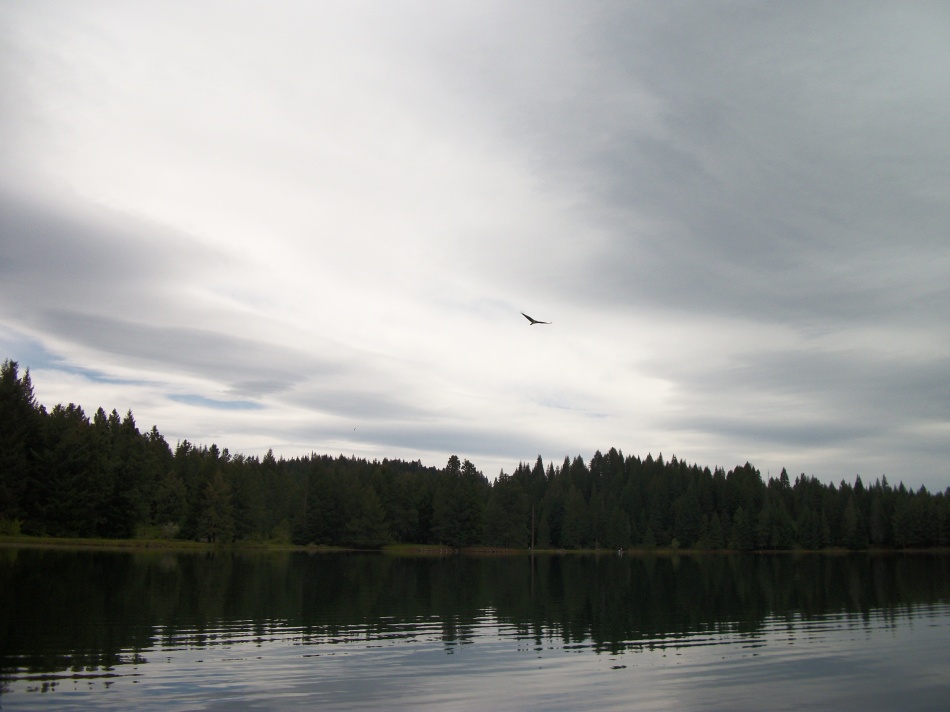 Ospreys gotta be my favorite bird, always putting on a show. At this Pond a big Bald Eagle lived nearby too, you would see him chase after the osprey sometimes after a meal I assume. I started out fishing the half of the pond that is covered in weeds. You don’t see anyone fishing this side usually because of the thickness of the weeds. But I know fish are in there. Early in the morning most of the time the Osprey dove into the water it was on the weeded side. And id imagine huge bass are sitting in there and loving it. I didn’t fish the weeds for long and had to get out into water that didn’t have near as much weeds. I got out there and put away my bass jigs and worms for most of the time. I brought my Ultra Lite spinning rod and tied on a couple flys. Almost all the fish came on the green wolly bugger, but a few hit the dry fly i was using too. I caught tons of trout, but they were all under 8″. Still put up a fight on my little 4ft UL rod. I started out trolling while rowing forwards, mostly because iv always rowed forward while in my pontoon. This makes it kind of  difficult when you get a fish on while trolling, your facing forward and the fishing is behind you. So I quickly learned to troll while rowing backwards. This made it a lot easier when i got a fish on, usually they stayed on. 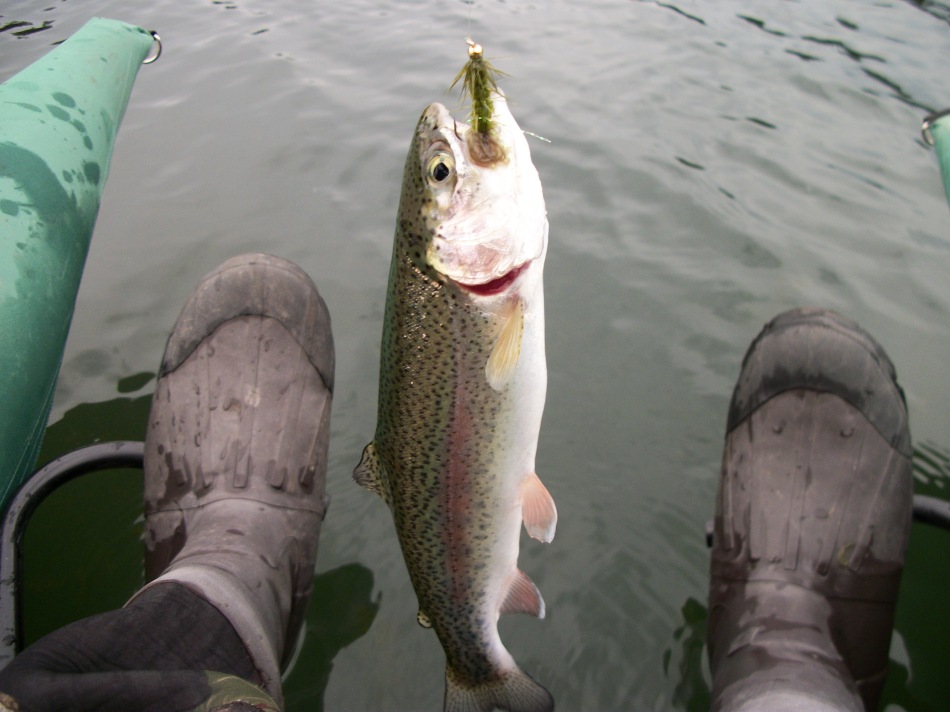 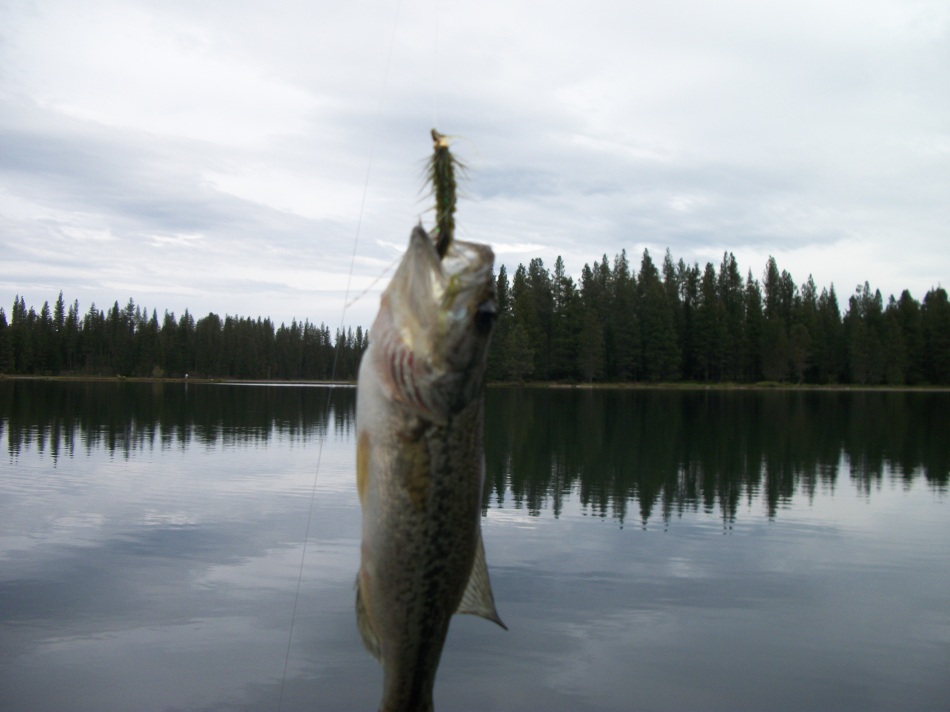 Fishing here was an absolute blast! The tip of my rod was always bouncing from fishing hitting the flys, a lot of the time they didn’t stick to the hook. But watching my rod tip go crazy was really fun, almost as fun as running plugs for steelhead in a drift boat. If i hadn’t got a little bite on my flys in more then a few minutes i knew i had some weeds on my line and it was time to reel in and check. It was constant fish action! Got a few little Crappies which are sweet looking and fight hard! Also caught a few tiny bass. One I thought was gonna be bigger because he took for the cover of the weeds after swiping my fly! People on the banks were mostly catching bluegills but i seen some catch an occasional trout. One bass boat was out and he didnt have anything good to report, said he couldn’t believe it was June because we were both wearing sweaters. Other boats out there were doing good catching the trout from what i seen.  Its a great place out and away from the city and anything. No cell service. Free Camping. Not many people. Great place!!!!

I ended up staying here Saturday night. Didnt feel like packing everything and going to a campground that isnt close to the lake, how it is at Stewart State Park. Medco was very fun. Didnt have to deal with water skiers or other types of speed boats. The bird watching was great. The peacefulness of this place is what really made me want to stay here instead of the big recreational Lost Creek Lake. I give this place two thumbs up if your looking to have a good time! Tight Lines my friends! 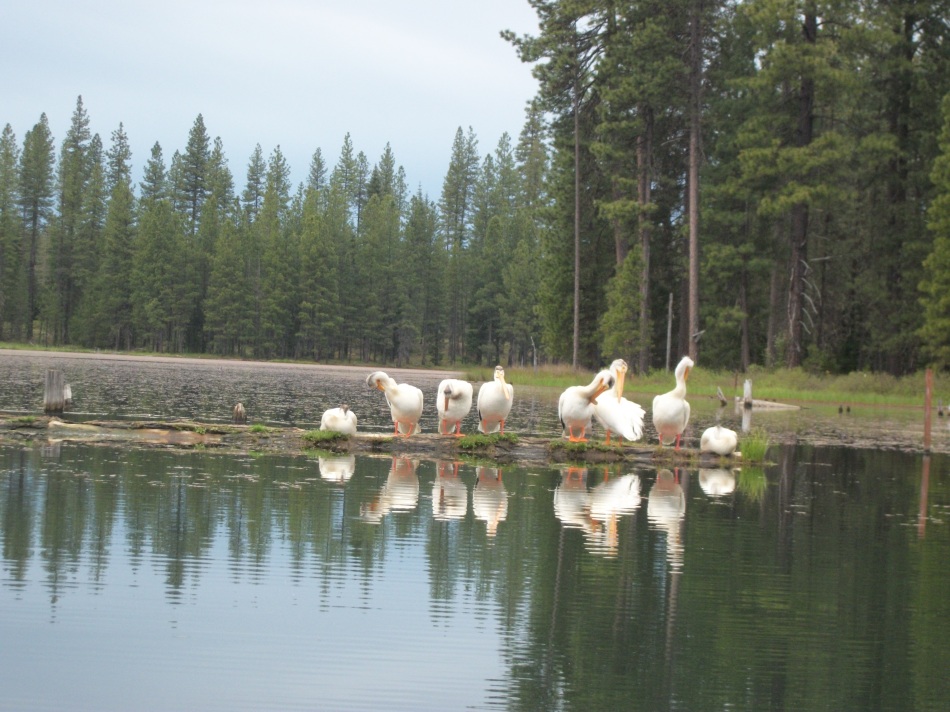 This entry was posted on June 8, 2011 by blazer_shane. It was filed under Medco Pond and was tagged with camping, Crappie, fly fishing, large mouth bass, Medco Pond, Oregon, rainbow trout.