Friday i went back up to Hyatt Lake. This time the weather was much nicer and alot of the snow had melted in the two days since i was there last. I got out onto the lake around 2 in the afternoon, and threw out some powereggs and used a spinner on my other rod. It took me roughly 2 and a half hours to get my first fish, and i got it right when i was having thoughts of being skunked. I ended up catching two really nice rainbows on powereggs floated two feet off the bottom. Both trout came within 10 minutes of each other, it was real quiet other then a little bass that fought like a big trout, got him on a panther martin spinner. The wind was real calm and at times not there at all, which was great. I fished til dark, and so did the only other boat that was on the lake. Just a weird side note. The only other boat on the lake decided to fish right next to me for most of the time. Oh well i still had a good time. Tight Lines! and GO DUCKS!!

That is Mount Mcloughlin glowing in the background 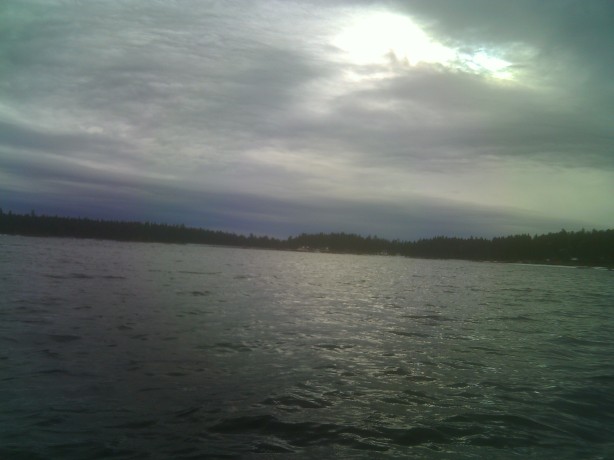 Well Trout season is about to close at a few of my local lakes, Hyatt, Howard Prairie and Diamond. So Wednesday i went to Hyatt, i planned on going to Diamond but its over two hours away and its higher in elevation. I got out on the water around 230pm and on my 2nd cast with a panther martin i had a real nice rainbow on. The funny thing is, i wasnt even retrieving the spinner, i was looking down at my reel at a loop that was in it when i heard a nice fish jump and splash. Thats when i knew i had a fish on, it was a nice trout that i accidentally released had to be 17 inches. That was the only trout i caught on a spinner the whole day, caught a little LargeMouth Bass though on a Panther Martin. I caught 3 more nice sized rainbows on power eggs floated 18″ off the bottom before i got blown off the lake a little after 5 in the evening. I was anchored up and had waves splashing over my pontoons and i was getting a little wet, thats when i finally decide to pull anchor. I made it to shore and it started snowing sideways. 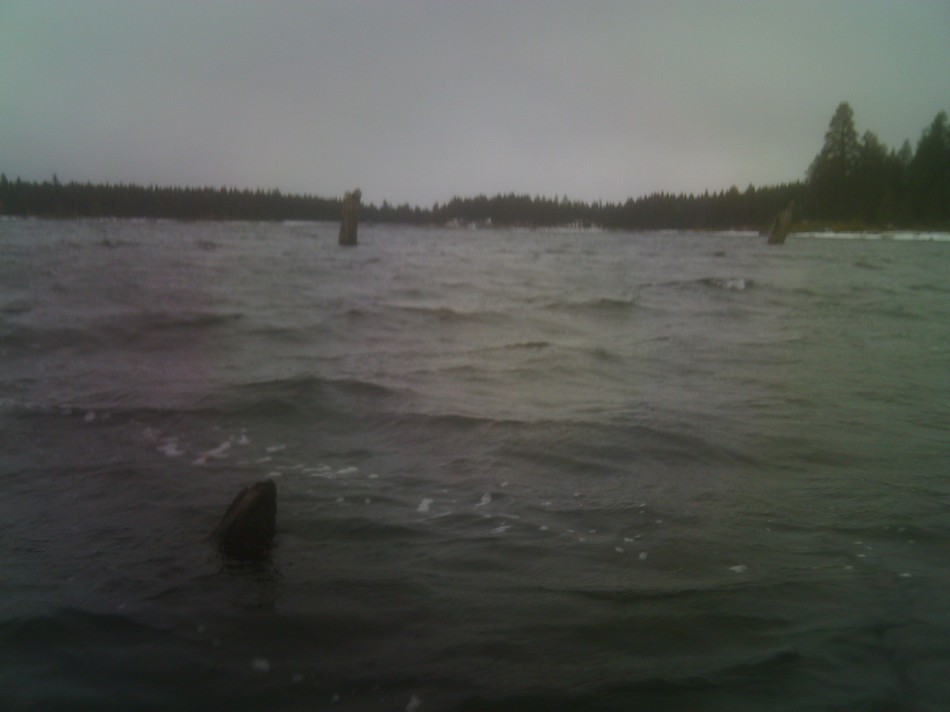 I got the bass right by the log sticking out there 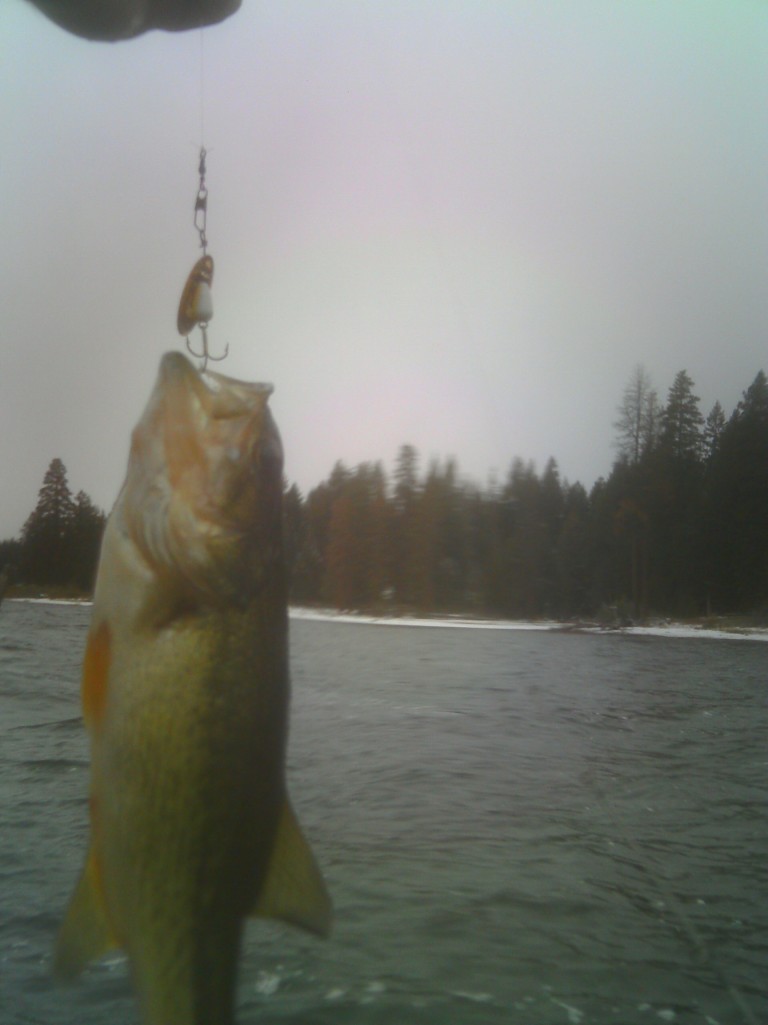 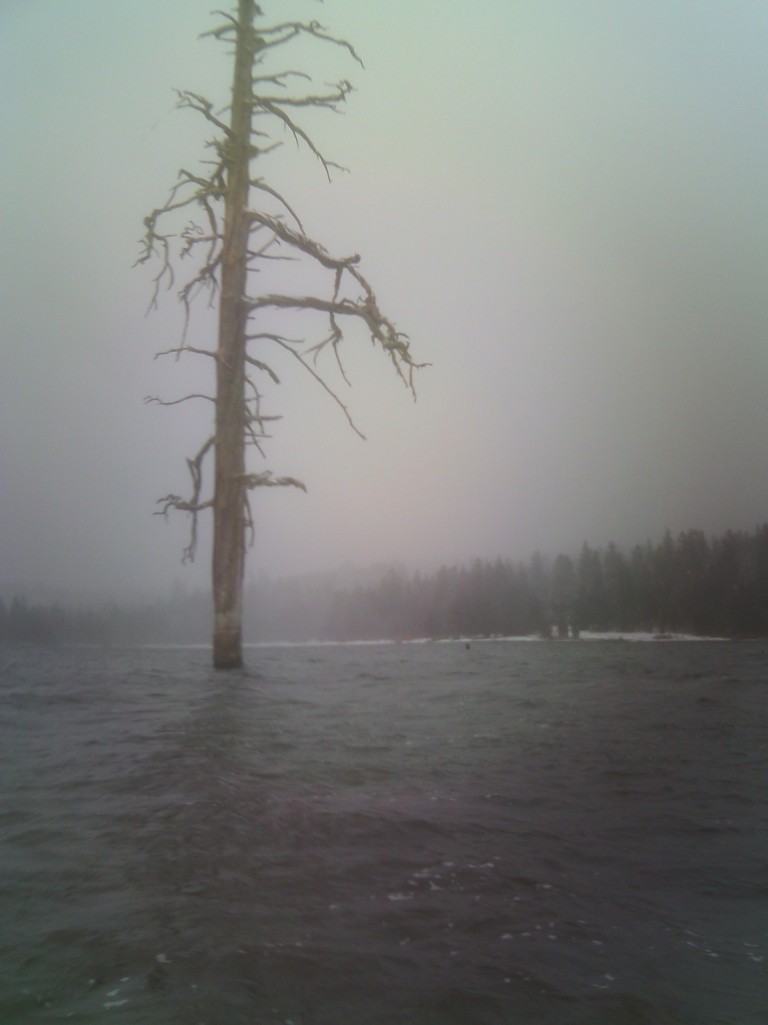 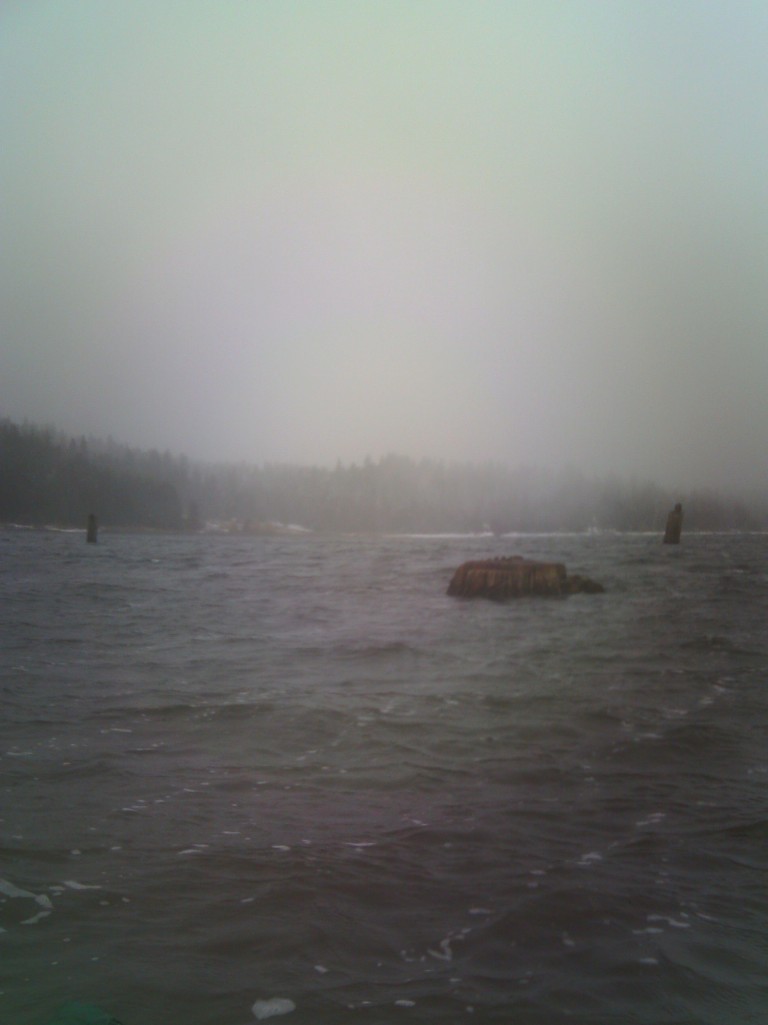 Great way to keep the trout cold and fresh

Thanks for stopping by my blog! If you noticed the color scheme change iv done, its for my #1 ranked in the AP Oregon Ducks football squad.

***This is an old report from August I had started but didnt finish. So here you go!***

Friday the 30th I got my car back from the shop and wanted to take it on a little test drive, so i went up to the mountains to Hyatt Lake. Hyatt early in the year is good to great  for rainbow trout. It opens on trout opener on the 4th Saturday of April every year, but some years its still covered in ice by then and not safe to fish on, and closes to fishing on October 31st.  But this time of the year its hard to keep the Large Mouth Bass off what ever you use. This Lake used to hold some BIG bass but the past few years its been infested in small stunted bass, that are all the same size. Although my step sister Brandy caught a nice 3-4 pounder ealrlier this year its very rare, they’ve actually re-located over 5,000 of these little bass this year alone. Also this lake holds the un-offical state record Large Mouth bass record caught by Colby Pearson, read the story here. I met Colby earlier this year at the local expo ponds, and recently we’ve fished Lake Selmac together from our pontoons. 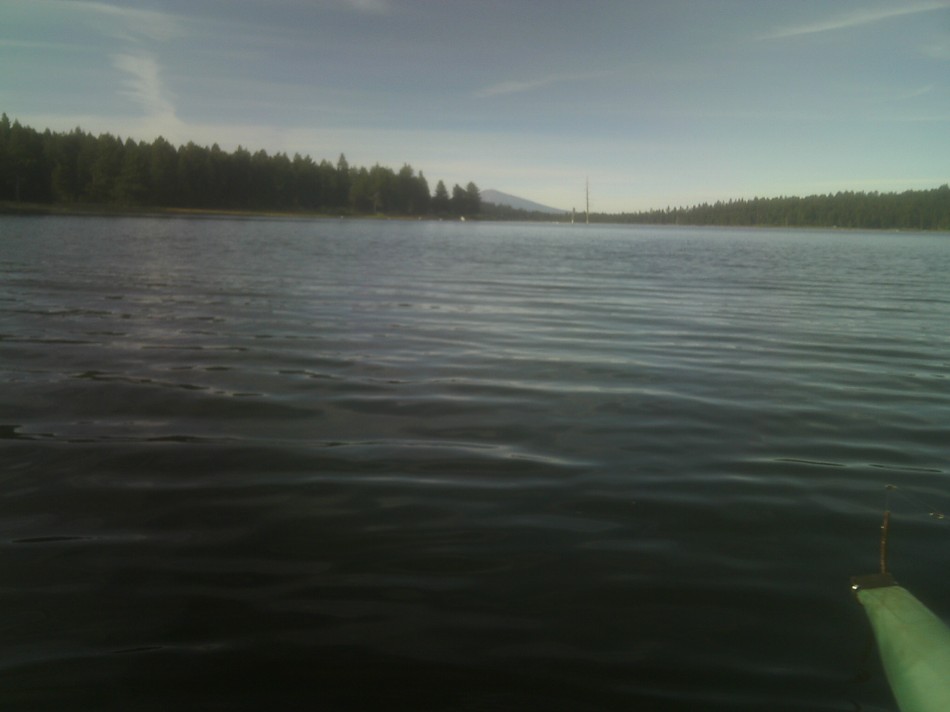 The Mountain in the background is Mount Mcloughlin by the way, just encase you’ve seen it on my blog before. I arrived to the lake around 4 in the afternoon. I fished for a few hours, before i got too cold (forgot my jacket). But i did mangage to catch ALOT of bass in that little amount of time. At one point i was getting a bite every cast and hooking up two thirds of the time, only manged to use one Yum Dinger worm the whole time too. 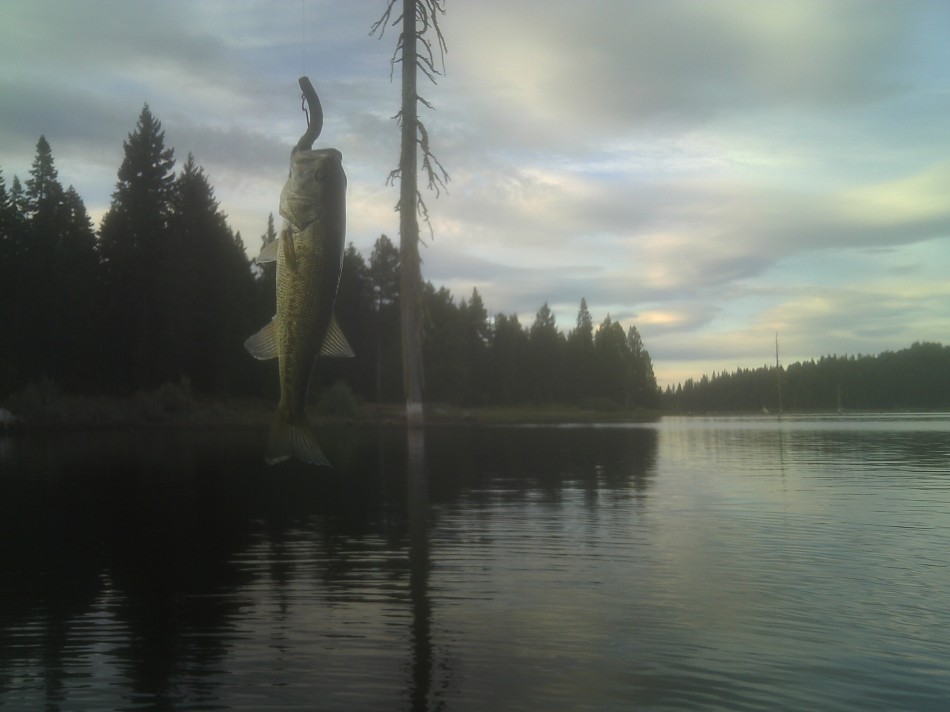 We all went out again this sunday, my step sister her boyfriend and their kids. First we fished Howard Prairie for a couple hours, i was the only one who caught fish there. caught 1 small large mouth on a panther martin, then i got a decent sized rainbow that had some girth to it. i handed my nephew the rod that i just caught it on and told him to watch the trout so it doesnt flop back in, I ran up to the car to grab my stringer, half way up the hill he says it jumped back in lol. It was quite windy there and no one else was catching so we went down the road to Hyatt Lake and fished for a bit and had lunch, and then took off to Willow Lake for the remainder of the day. At Willow we started catching small bass on spinners, i hooked into one nice rainbow that managed to get off, another great day of fishing!!!

First 2 are of Howard Prairie Lake 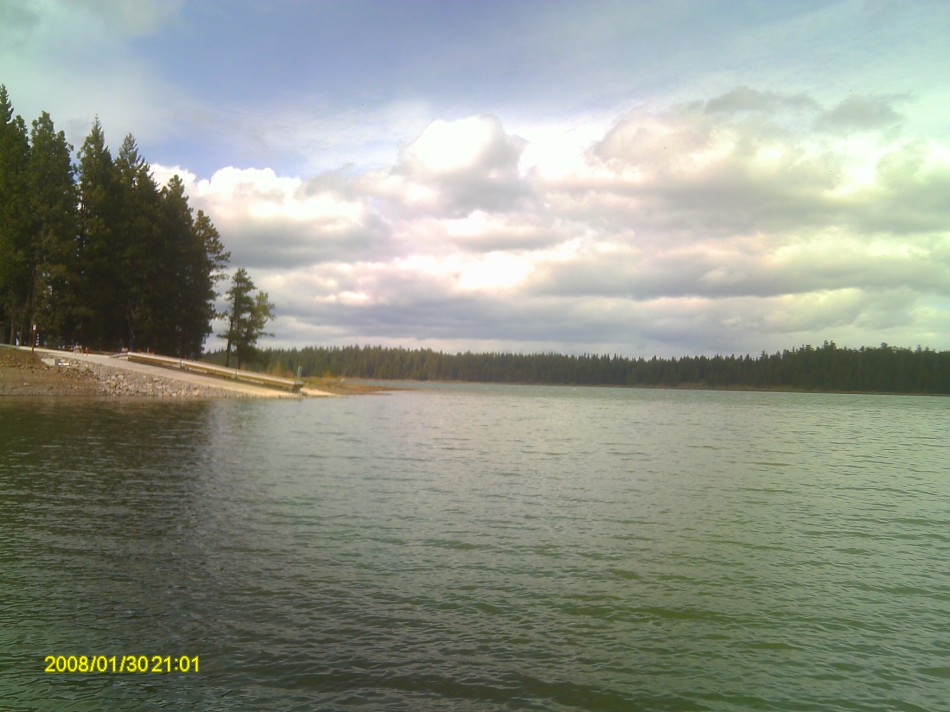 Next two are of Hyatt Lake 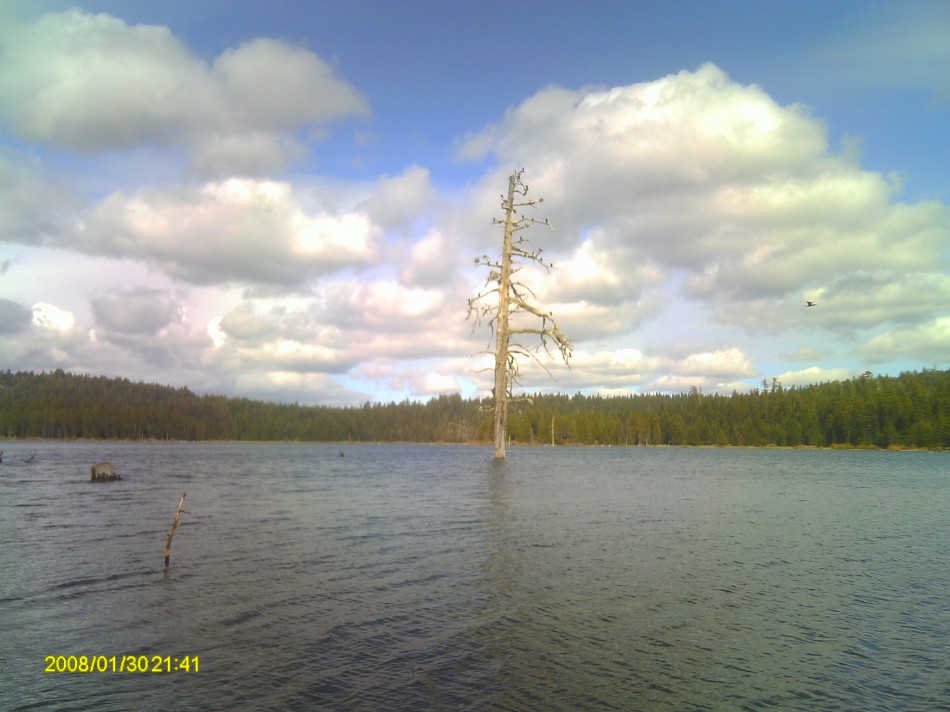 Next three pictures are from Willow Lake

Next one is my step sister with the biggest bass of the day, we know its not big 🙂 but theyre still fun to catch

You can probably tell my date is still off on the camera, if i remember im just gonna turn it off next time i use it. Thanks for stopping by and TIGHT LINES !!

Saturday was Trout Opener in Oregon, every lake opened up to fishing and most rivers are open now except for some coastal rivers. The lakes in my area that had been closed to fishing were Hyatt and Howard Prairie, they are only a few miles apart. Howard Prairie is a much larger lake but the bank access is very limited if you dont want to pay 4 dollars to park in the special areas. Diamond Lake is the other lake in my region that opened to fishing saturday but its still covered in ice, but should be good to fish in a couple weeks. Diamond is one of the best rainbow trout fisheries in the state, a few years ago they had to kill off the whole lake because of illegally introduced tai chubbs, and since then the lake has been back to its glory days check out the fishing report from the resorts website lots of fish pictures http://www.diamondlake.net/fishingreport.html

I got to the lake around noon, and found most of the rogue valley fisherman had the same idea as me to fish Hyatt. I fished Hyatt twice last year and could count the other people fishing on one hand, saturday was a different story. After circling the lake i chose a spot that wasnt too crowded except for the birds, but i didnt even see them catch fish. I fished there for a couple hours using worms and spinners, had zero bites. The sun would of been nice, but the damn wind was freezing, i ended up in my car for a little lunch and i caught the last quarter of game 4 of the blazers win. Then i drove to the other end of the lake, to a campground i forget the name of, its the one with a boat launch on the other side of the resort. Fishing there was snag city, i ended up fishing with powerbait on the bottom, and worms under a bobber, got snagged up using both. I even fished some inflated worms on the bottom, with no avail. I put on my favorite panther martin and cast a few times then i snag that up too and lose it. Thats when i started to pack up, it was around 630, i probably would of stayed longer if it hadnt been so cold, and the gear i lost. Im defiantly coming back once i get my pontoon boat, i think if i fish the old creek channel ill have good luck, and maybe the water needs to warm a bit.

Next two pictures were taken on Green Springs highway. Just a little further down the road u can see Emigrant Lake at the bottom.

Thanks for taking a look! and tight lines do all the the fisherman/women 😀