Friday June 1st I got invited to go trolling for trout at Falls Creek Reservoir, by my friend Ted. It’s another lake that iv never been to let alone fished so there was no way I was gonna pass up the offer to fish it from his boat! I met him in the town of Springfield around 630 and after a couple stops for gas and bait we pulled into the boat launch to find it empty, fishing a week day has its perks! We trolled around the dam at first and had no takes, then we trolled up towards the arms and Ted had his first fish to the boat. Not long after he got his second, and while he had the motor off I was casting a brass Thomas spoon and hooked into my first of the day, it felt like a nice one but came unbuttoned soon after it surfaced. After that fishing became pretty slow so we went off to different part of the lake up one of the arms, where he and some buddies usually do good, and the spot didn’t fail.

We used ford fender trolling set ups with a night crawler on about two feet of leader. Ted let me use his home made fender, which he had never caught a fish on until I put it on my rod. And the home made ford fender was the ticket on that day. It out fished the store bought ford fender three to one probably. After a little while of out fishing him on his own trolling set up I started feeling bad and offered to trade set ups but he refused. We both caught countless fat hold over rainbows, and we both left the lake with our limits of five trout each. Was an awesome day on the water with great company. Ill finish this post with a picture of the five Ted kept. Mine were around the same size but his picture came out better then the one I took of my limit. Thanks for reading and Tight Lines! 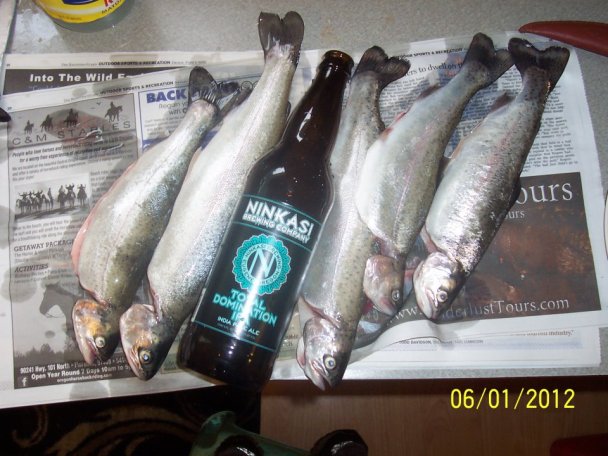 I met Phil and Kenji at the boat ramp around 7am, we had another morning slay ride planned! It was another great day with the YGA ( Young Gun Anglers) We passed Charlie at Sandy Bottom, he had a couple clients, we actually knew the clients, they were from Phil’s home town Happy Camp, CA. We waved when we went by and we only seen them a couple brief times the rest of the day. One of them took this photo when we went by in the morning at Sandy Bottom. 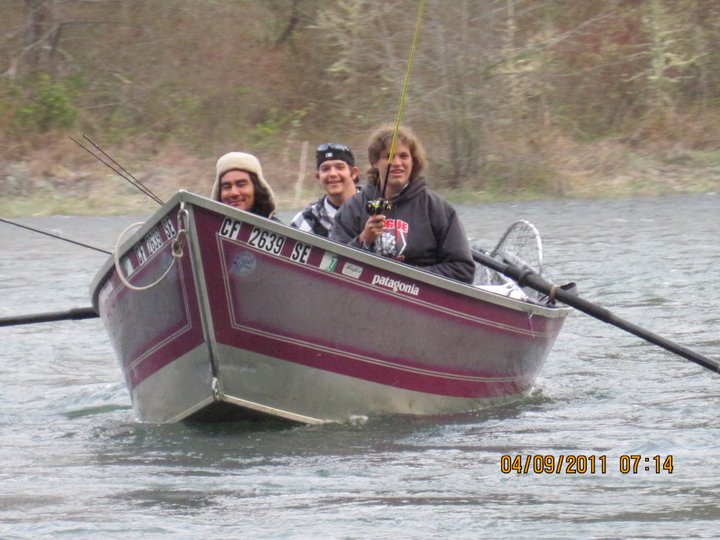 We got down by the Slide Hole and anchored up and were chatting when my rod got the first take down of the day! It was a nice little native steelhead that we released so he could come back another day to be caught! We then took the side channel and sat next to one of the nicest houses on the river. Most people dont run plugs in this area. But in trips past we caught trout here and the water looks really good. This day we got our first steelhead in this hole, and it came on my rod again. But this time it was Phils turn to reel one in. It was another nice wild steelhead that we let go in hopes of catching again next year. Our third steelhead of the day was one we were waiting for. A real nice chrome hatchery fish. And it came on Kenjis rod, so the 2 day license paid off once again for him!

Not far from where we got this one my rod got the final take down of the day. I brought in a real nice chrome wild steelhead. We released it right away so no pictures were taken of it. We did get video of all four of the steelhead caught this day. But when Phil put the files on his computer he some how lost 2 of the clips or deleted them on accident. But he did get video picture stills of the fish before it happened. So watch the video and enjoy! Ill try to do my reports in more of a timely manner but iv been busy puttin a hurt’n to these fish! Tight Lines!

Being a member of online fishing forums sometimes pays off with open seats on boats. This is really awesome because my boat has only been in still water so far. So any time i can get the chance to fish from a boat i take it! Wednesday was actually the first time iv fished from a drift boat. Phil Tripp aka Phil_Bud on the Oregon Fishing Forum offered me a seat on his really nice Fish Rite drift boat and we met up at 630am at the boat ramp. His buddy Kenji had drove up the day prior from California a few hours away to hang out and fish during spring break. We got to hole below the hatchery called corner pocket or sandy bottom im not sure what it is lol. Anyways Phil started out with his fly rod and not long after we got there he hooked up with a real nice steely, but the fight only lasted about 8 seconds before it broke him off, but by the bend in the rod it looked like a fatty. Not long after that Kenji hooked up with a half pounder steelhead on a spoon and released him. Then we fished for a long while before hooking up again, it wasnt until about 430pm. We were anchored up pulling plugs from the same hole but we only had one rod in the water at the time. About 20 minutes prior we had spotted a beaver so Kenji was looking for it and Phil was eating sardines so when the take down happened i was the only one watching the rod and shouted out “fish on!, fish on!” and then Kenji grabbed the rod and the fight was on! Phil brings two video cameras every time he fishes so not long after the fight started i started filming it and Phil got in the water so he could net it. So watch the video and experience it. Also watch Phil’s other videos on youtube he has some great videos, some even have the take down on film which is awesome.

Phil and I didnt catch any fish that day but even if we did we still wouldnt of had as much fun as watching Kenji catch his biggest fish ever, probably most beautiful fish ever too. I want to thank Phil again for taking me fishing. I had an absolute blast fishing with you two. Thanks to my readers as well id also like to thank the fish and the great state we live in! Tight Lines!